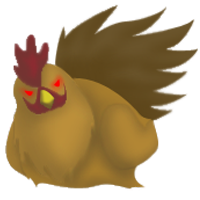 It began as a good idea, and a month later the ball was rolling. Max, Alec, Cameron, and I were going to collaborate on combining their majorly active sites into one large one. Several hundred thousands of visits a month was the plan, and we actually reached those numbers it in the month of  May. This would be a big venture for all of us, but soon things went sour and 3 months later the site was announced to be closing until further notice. Why, you ask?…

If you’re not aware of what EvilChicken is, you should go ahead and skip this entry. Things are going to get in-depth and it’ll be hard to understand at points if you weren’t there from the beginning.

Before I go on, I’d just like to preface this by saying that I’m not trying to shift any blame around, but instead outline the shortcomings and faults that led to the site’s demise. This should also serve as good reference material for anyone that wishes to start a large, community oriented site.

Alright, so I’m just going to dive in and outline what went wrong, what went right, and what needs to be done before the site comes back up again.

What Needs to be Done

Many people invested many hours into this site and to see it go is a shame. When it does return we will have learned from our mistakes and further, embarrassing mistakes may be averted.

I’m going to close this by reiterating that I am not trying to shift blame. I do indeed have a lot to do with most of these points, for better or worse. I’m sure I’ve left many other things out, but those should be saved for another post.

12 thoughts on “Why EvilChicken Failed”