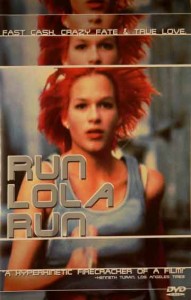 It’s been a while since my last post, but it doesn’t matter, since no one reads this thing. Of course I’ve been busy with MechSociety, but I’ll save you the pain of that blog post for later. I’m actually here, on your internets, to whine about a German movie with lucid music and a red haired running chick.

If you’re a normal person, you wouldn’t know who Franka Potente is, but alas, I do. She’s the main character in the movie Run Lola Run (Lola Rennt in German), which I haven’t, and probably will not see. Don’t be confused though, I do want to see it, but because it’s a foreign film, it’s kinda hard to find.

Why do I want to see it? Well, from clips on teh YouTubes, you can see the simple, but immerse storyline, coupled with music by Franka Potente and friends. Really, it’s just one, gigantic German music video.

The music is the best part, and is why I yearn to see it, though. Take a listen to the song below, and tell me what you think.

It’s deep, lucid, and catchy. What’s not to like?