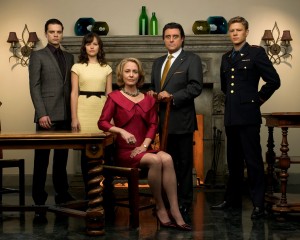 Prime time television is a cruel place. If a show scores below two million views consistently, you can expect it to be cut by the executives. Sometimes that happens to truly great shows that just happen to be competing with other already popular programs like American Idol or even the Superbowl. Nonetheless, while everyone else is watching Simon Cowell in his ill-fitting shirts, there are still those one million loyal viewers waiting to see what happens in their favourite (albeit unpopular) series.

Today, I’ll be sharing some of those shows that had great potential, but a bad time slot. With all the garbage on TV these days, it might be good to shed some light on some shows that were unique, well produced, or ahead of their time.

I just need to preface this by saying that these shows didn’t necessarily end due to lack of interest. Some may have just expended the storyline.

This is number one for a reason. Rarely do I find a drama that I can actually recommend to people, and with Kings it’s no exception. Sure, the environment in which the story takes place is derived from the Bible, but that doesn’t bug me at all. The compelling acting and ever-evolving story always kept me counting the days until I could catch the next episode online. Unlike a lot of other shows that have a new scenario for each episode, Kings makes sure to play things out like one very long movie that’s been diced up into 43 minute pieces. You can typically expect what’s going to happen, but never how it’s done or what happens along the way.

It’s too bad this show was up against American football as it had great potential. Also, this was a more recently canceled show, so there’s a lot of outrage from the community to bring the show back. If not on NBC, hopefully we can see Kings on some other cable network. Make sure to share your thoughts, if you like the show, with NBC’s executives.

Based upon the 1976 series, the modern day revival of Bionic Woman did a very good job at introducing another generation to the story that they would have missed out on otherwise. I thought it did, anyway. Alas, it only ran for one season in 2007 with a concurrent six million viewers and only consisted of eight episodes.

There was a mess of speculation as to whether the show was canceled. You may or may not remember the 2007 writer’s strike, which occurred during the production of the first season. Of course, without writers, production halted and no more episodes were released. After the strike had ended, it appears that everyone had seemingly forgotten the series as it’s content was slowly pulled off of the NBC sites and hulu. Two years later, and I still hold out a bit of hope for a revival, but it looks bleak.

It’s probably the aviation nerd in me, but I loved being able to see some (although scripted) behind the scenes action in one of the larger airports in the United States. Like Bionic Woman, LAX averaged about six and a half million viewers across it’s thirteen episodes and only lasted one season.

I can understand why this show was canceled. It only seems mildly interesting to a small subset of people, and to everyone else it just seems like a drama encoded in the mundane operations of an airport. I do admit that I cared little about the actual story of the show and more about the United 744s in the background, but at least they tried. Still, it was very enjoyable to watch as it was a very unique setting for a drama to take place. I commend NBC for giving the show a shot.

Last Comic Standing lasted through six hilarious seasons and is essentially the American Idol of comedians. A panel of judges listen to comics at various casting calls throughout the United States, determines if they have the stuff, and forwards them onto proceeding rounds (in front of live audiences) if they do. However, in the later rounds, teams are developed and rivalries form as the two teams compete against each other and ultimately only one comic is left standing, hence the name.

As I mentioned, six seasons of this show were produced, ending in 2008. The show itself was genuinely funny, and I loved the idea of listening to concurrent acts and jokes while the comedians telling them were rated. Near the end everyone tended to step up their game in attempts to win, and the result was hysterical.

This show had a very unique setting that I enjoyed very much, and a plot centered around a society in which “hillbillys” rule is certainly fresh. My Name is Earl is one of those shows where each episode drops the characters into a different situation, advancing the storyline very little. Something that always irked me was whenever the show made progress to further develop the characters, it would always be reset to how you knew them back in the very first episode eventually. That’s something I’ve always hated about that type of story, but I still found the 22 minutes of it each week very enjoyable.

Four seasons were eventually produced, raking in around eight million viewers for each episode. The show was canceled in 2009 during the production hiatus.

Again, the aviation nerd in me loved this show. There’s just something about pissed off, incoherent passengers that makes me all giddy. Also, the seemingly genuine look into the operations of a CSA (customer service agent) for Southwest Airlines always was interesting to me. I’ve always been interested, for some reason, in careers that most people take for granted.

The United States series with Southwest as the focal airline was actually based off a United Kingdom program of the same name, only featuring Easy Jet as the airline in the show. Unlike the UK series, however, Airline in the US was canceled after three seasons in 2005. Production of the UK version still continues.

Derived from Australia, Thank God You’re Here is one of the few improv shows that seems to strike my funny receptors consistently. Actors are essentially dropped into skits with no idea what they’re doing, and they must play along to find out what the skit is about from the actors who are in on the story of the skit. The only clue the actors had before hand as to what the skit was about was the costume they were told to wear. This show was on caliber in terms of funny with Who’s Line is it Anyway (another show I deeply miss).

Lasting one season over seven episodes, Thank God You’re Here was a very unique way of presenting improvisational comedy. It’s short life was during the year of 2007.

I’m a fan of the This American Life radio show, and when it was announced that they would be producing a short, thirty minute show, I was estate. Basically, interesting stories from typical people are delivered as usual, but with visuals and interesting cinematography. A few of the stories were even taken from the radio show and retold (or maybe it was the other way around).

I wasn’t able to catch the reason of the series ending. I’m assuming that it was just too much work to keep going, as poor Ira (the host) also needs to work on the radio show. Regardless, it was very provocative and interesting while it lasted and I hope it returns. The last episode aired in early 2008.

9. Malcolm in the Middle (FOX)

Most people from my generation remember watching the antics of the dysfunctional family in which Malcolm is in the middle of. I did. Malcolm in the Middle was a unique spin on a [generally] family friendly show. Each character had his own quirks that made him diverse from the rest of the family, keeping each episode a treat to watch. The show lasted six years, and it was great to see how the characters matured over that time.

Sadly, the show ended in 2006 with seven seasons. Perhaps it was due to a growing lack of interest among the viewership. Malcolm int he Middle had a good run overall, but didn’t quite end with anything significant as I had hoped. Alas, the show was very fun to watch and will remain one of my favourite programs.

Like Kings, King of the Hill has been canceled recently. Most episodes featured a form of satire in one way or another, and generally wasn’t a dumbed down animated comedy show like Family Guy. Although entertaining, the comedy in this show was not in the form of jokes, but rather in how the characters lived their lives. The look of horror on Hank Hill’s face when he sees someone grilling on charcoal instead of propane is just hilarious.

The reason for the cancellation is due to lack of interest. FOX is trying to cater to the kind of person that finds Family Guy funny, and a show like King of the Hill doesn’t really follow suit of that atrocious program. More insulting, King of the Hill was replaced by a program entitled The Cleveland Show, a derivative of Family Guy. Thirteen seasons can’t lie – this show was popular.

6 thoughts on “10 Shows You Should Have Seen”